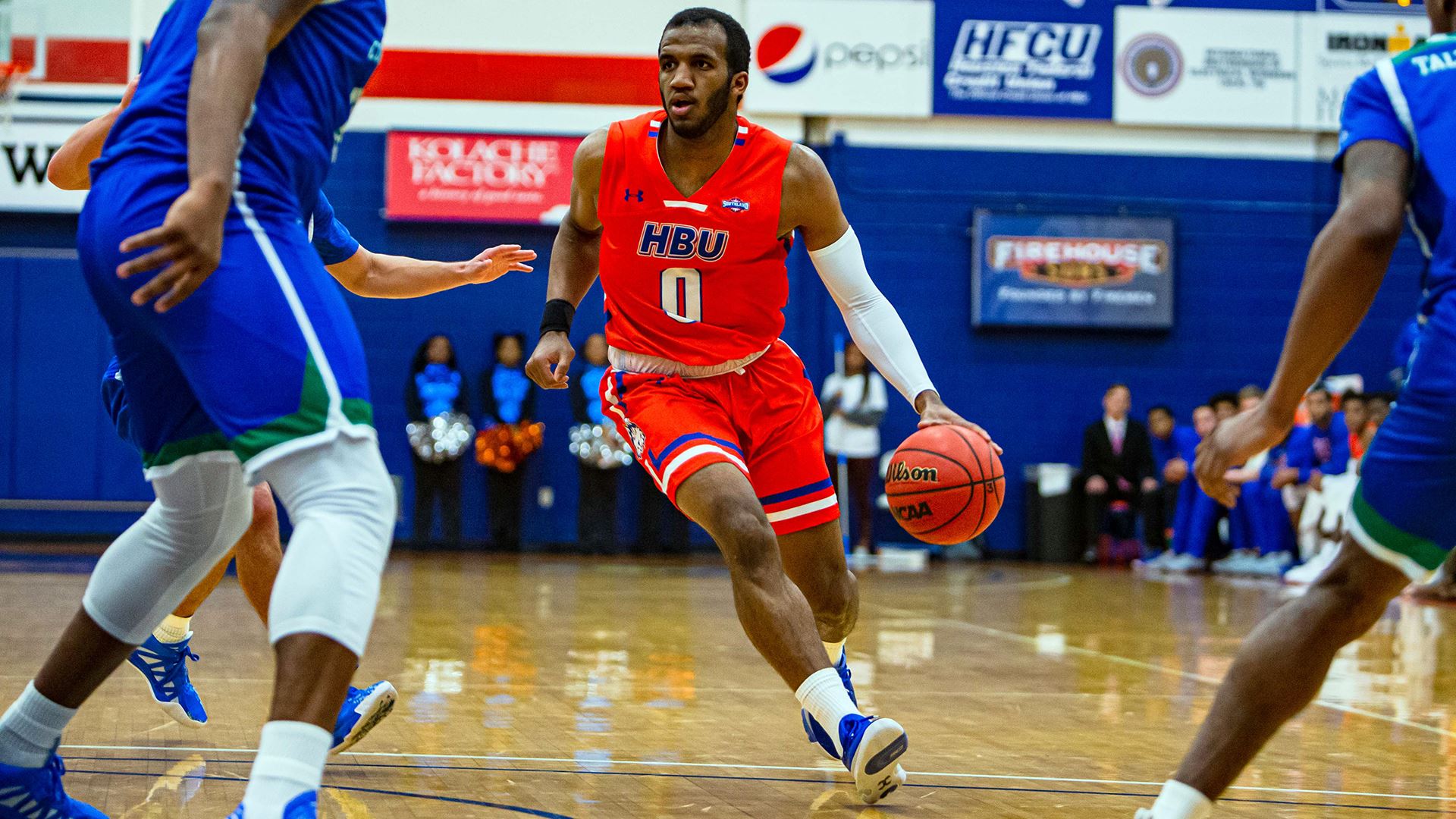 HAMMOND, La. – The HBU men’s basketball team picked up its first road win of the season after closing the game on a 14-5 run over the final 4:35 to take down Southeastern Louisiana on Wednesday evening inside the University Center.

The Huskies (3-17, 3-8 SLC) picked up their first 12 points via the three with Jalon Gates contributing nine of those. Gates third three of the game came at the 15:23 mark and put HBU ahead 12-8. Back-to-back layups from Benjamin Uloko and Qon Murphy made it a five-point game with the Huskies leading 16-11 at 13:04.

The Lions (6-17, 3-9 SLC) scored the next two baskets to pull within one but HBU was again able to push its lead back to five, 24-19, on Gates’ fourth three of the night with 7:51 on the clock. The Huskies continued to build a lead that reached as high as nine on a Ty Dalton trey made it 35-26 with 3:44 remaining in the half. A little less than two minutes later, back-to-back threes pulled the Lions to within two, 38-36, with 55 seconds to go. Qon Murphy knocked down a three at the 33-second mark to push HBU back ahead by five for a 41-36 lead the Huskies would take into the half.

Jackson Stent hit a three from the corner on HBU’s first possession of the half to go up 44-36 but SLU scored the next seven points to cut it to a one-point game. The Lions’ run was stopped on an Ian DuBose tip-in at the 16:16 mark. Consecutive baskets from Tyron Brewer and Maxwell Starwood gave SLU its first lead, 47-46, since the 16:18 mark of the first half.

The Huskies answered with an 8-0 run to go back ahead 54-47 with 12:07 left on the clock. Southeastern then came right back with a 13-5 run to take a one-point lead with a little over eight minutes left. The teams then traded scores, going back and forth with the lead, until SLU went on a little run to lead 71-65 with 4:35 to go.

HBU then scored the next seven points, capped by a Myles Pierre free throw to lead 72-71 before SLU’s Von Julien evened things up at 72-72 with a free throw of his own with 2:32 showing on the clock. DuBose converted an and-one on the next possession to go ahead by three and immediately came up with a steal on the ensuing Lion possession and made the fast break layup to push HBU’s lead to five in a matter of seconds. SLU got a bucket but Pierre made a pair of free throws to get it back to five and a last second contested three-point attempt by Byron Smith was off the mark.

Gates led the Huskies with 19 points, 14 of which came in the first half, on 7-of-11 shooting from the floor and 5-of-9 from deep. DuBose set a new career-best with a game-high 14 rebounds while dishing out seven assists and scoring 10 points for his third double-double in the last four games.

Senior Jackson Stent finished with 11 points and matched his career-high on the boards, pulling down six rebounds. Sophomore Benjamin Uloko, meanwhile, was an efficient 6-of-9 from the floor for 16 points off the bench and added five rebounds.

The Huskies are back on their home floor in Sharp Gym this Saturday, Feb. 8, when they host Northwestern State at 7:00 p.m. HBU will be wearing their mid-1970’s Hustlin’ Husky throwback uniforms against the Demons.