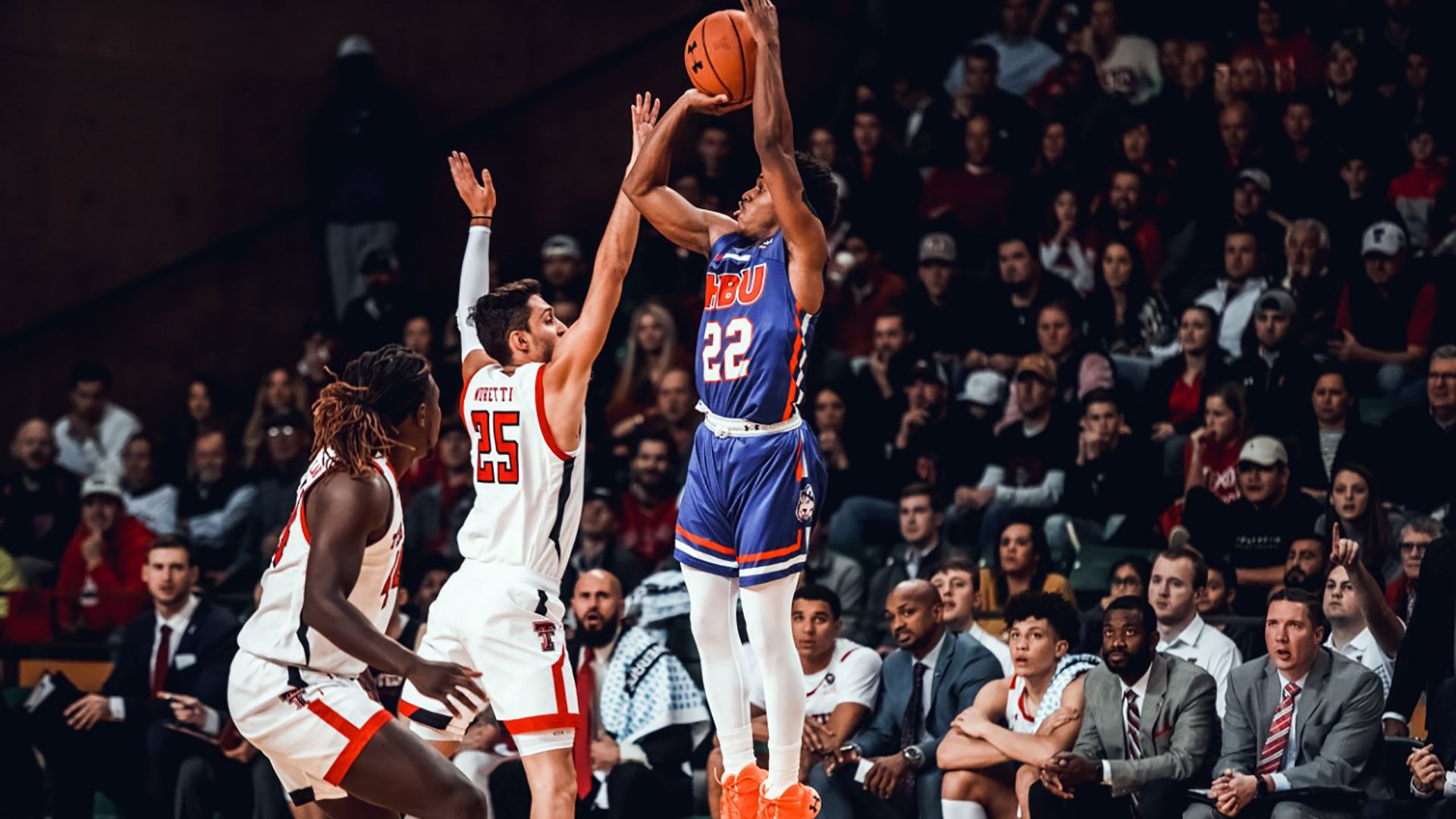 Jalon Gates pours in 21 for the Huskies

MIDLAND, Texas – The HBU men’s basketball team jumped out to a quick nine-point lead but the 11th-ranked Texas Tech Red Raiders defeated the Huskies, 103-74, in the Al G. Langford Chaparral Center on the campus of Midland College on Wednesday evening.

HBU (0-3) raced out to a 9-0 lead thanks to six points created off three turnovers in the first 2:04 of the game with Texas Tech (3-0) not getting on the board until a Davide Moretti jumper at the 17:44 mark. That Moretti bucket started a 14-0 run for the Red Raiders that was broken by an Ian DuBose dunk with 14:24 on the clock.

The Red Raiders pushed that lead up to 12, 25-13, after a Jahmi’us Ramsey three but the Huskies whittled their deficit down to six, 32-26, after four points from Ty Dalton and a free throw from Jackson Stent with 7:11 remaining in the half. HBU wasn’t able to get any closer as TTU closed the half by out-scoring the Huskies 22-13.

After halftime, Texas Tech opened the second half with a 13-6 run, with HBU’s Ryan Gomes dropping in a pair of layups, in the first 3:09 of play to go up by 22. The Red Raider lead got as high as 35 with 9:14 left and the Huskies cut that down to 27 after a pair of Noah Thomasson free throws under the two-minute mark.

Senior Jalon Gates finished with a team-best 21 points, connecting on 5-of-9 from behind the arc and 8-of-13 from the floor. He now has 14 made threes through just three games. DuBose was 6-of-14 for the game to add 17 points for the Huskies and pull down five rebounds. Junior Philip McKenzie led HBU with six rebounds off the bench, all in the second half. Dalton added nine points while Myles Pierre scored seven with Gomes and Qon Murphy both contributing six.

The Huskies forced Texas Tech into 23 turnovers while committing 18 themselves, turning those turnovers into 20 points. The Red Raiders held a distinct 48-28 advantage on the boards and scored 56 of their points inside the paint.

The Huskies will have more than a week off before heading to Big Ten country to face the Michigan Wolverines inside the Crisler Center in Ann Arbor, Mich. on Friday, Nov. 22.