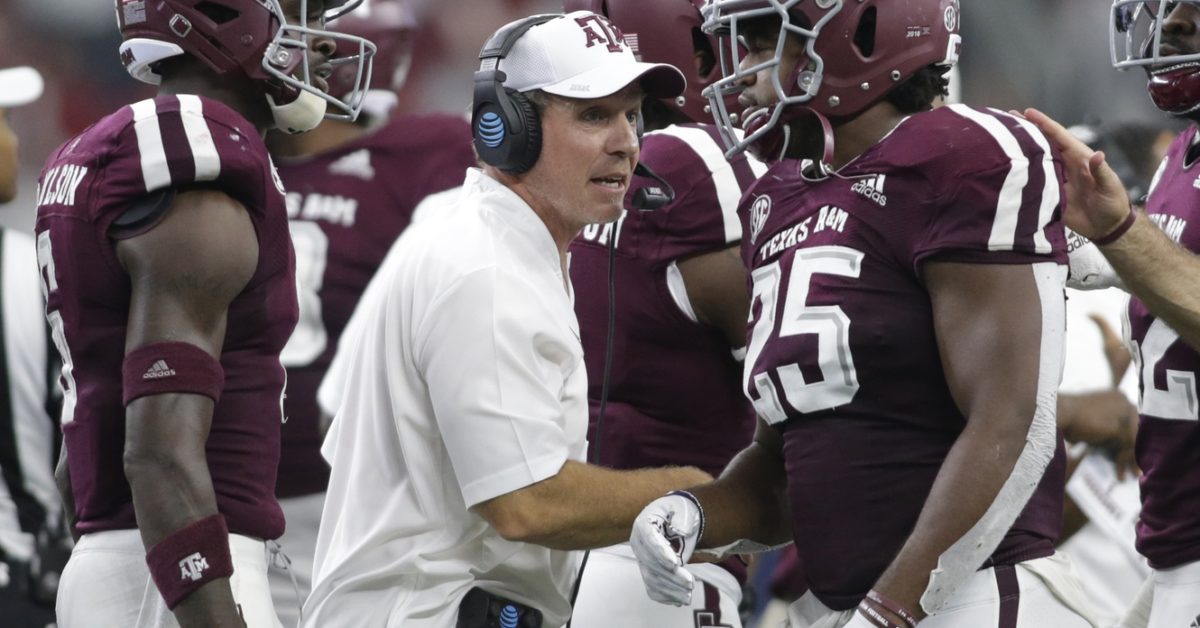 The Aggies of Texas A&M defeated the Texas State Bobcats at Kyle Field in front of a loud and proud crowd. And oh boy was it loud in there.

What a start to the college football season. Especially if you open the season at Kyle Field. There’s no better place to watch a game than College Station, Texas.

The home of the Aggies was loud as the Texas State Bobcats attempted to come in for the upset. However, it’s no easy task to win in front of the 12th man. Let’s take a look at the game a little deeper.

Things got off to a great start for Texas A&M. Kellen Mond ran a balanced offense while throwing some gems in the air. After both teams punted on their first drive, the Aggies struck first. The second drive saw A&M march down the field in nine plays for 72 yards. The end result was Mond connecting with receiver Quartney Davis for a 21-yard touchdown.

After two consecutive punts for the Bobcats, the Aggies struck again. This time it was Jashaun Corbin who ran in the one-yard touchdown. At the end of the first quarter, Texas A&M 14, Texas State 0. It would get worse for the Bobcats.

However, things still started a little off for the Aggies. But, let’s remember that this game one of the season. Nonetheless, A&M came out firing.

While the first quarter started a bit slow, the second quarter saw both the offense and defense really ramp it up. In fact, this defense managed two interceptions to really get under the Bobcats quarterbacks. Tyler Vitt threw two of the three interceptions. That eventually led to Gresch Jensen coming into the game. However, he threw a pick as well.

Meanwhile, Mond continued to look accurate as the Aggies tacked on two more touchdowns. One of those touchdowns belonged to Mond as he ran one in as well. At the end of the half, it would be Texas A&M 28. Texas State 0.

It was a long night for the Bobcats, to say the least.

First half notes and stats

The defense played exceptionally well to start this game. Tackling on the edges, stopping the receivers, clogging the lanes, and of course the interceptions. This will play a big role if the Aggies are to upset Clemson next week.

One more thing to note, Mond looked so excellent that the hopes are high in Aggieland. He may be the next great quarterback in A&M’s history. However, Mond still has much to learn under Jimbo Fisher. Limiting mistakes will be key for him and this team.

The start of the second half was less stellar than the first half. Both teams suffered multiple three and outs, Both offenses struggled, and the A&M secondary really came out to play. In fact, they got their 4th interception of the game in the third when Myles Jones got his second pick.

The only other notable action of the third quarter was a field goal attempt that made the game 31-0 in favor of the Aggies. However, Isaiah Spiller ran the ball for a near touchdown of 80 yards to put the Ags in position to extend the lead. The Aggies would end the quarter near the goal line.

The opening of the fourth saw the Aggies pile it on with another touchdown catch. 38-0 as Ausbon caught it from Mond. Speaking of Mond, he would sit the rest of the game as it was basically over.

Zach Calzada would step in for his first real bit of action. In fact, the freshman is touted for his arm strength and looks to provide some nice backup work behind Mond.

The rest of the fourth quarter was highlighted by the backups coming in and taking over. The Bobcats managed to score a touchdown at the very end, but the game was over long ago. The Aggies handled business and won 41-7.

Overall the Aggies dominated as they should have. They looked balanced on both ends and they look poised and ready to make the trip to Clemson next week. That game will certainly test Fisher’s team and evaluate just how far his program has come.

Especially exciting is the fact that the secondary for the Aggies looked solid and should give Trevor Lawrence some fits next week. That defense will be key if they are to make this a game. Also, Mond will need to replicate his performance from last year to get this statement win.

Get ready Aggie fans because here comes the real test. Be sure to stay tuned to NGSC Sports for the latest in Texas A&M Football.

See you next week Aggie Nation.