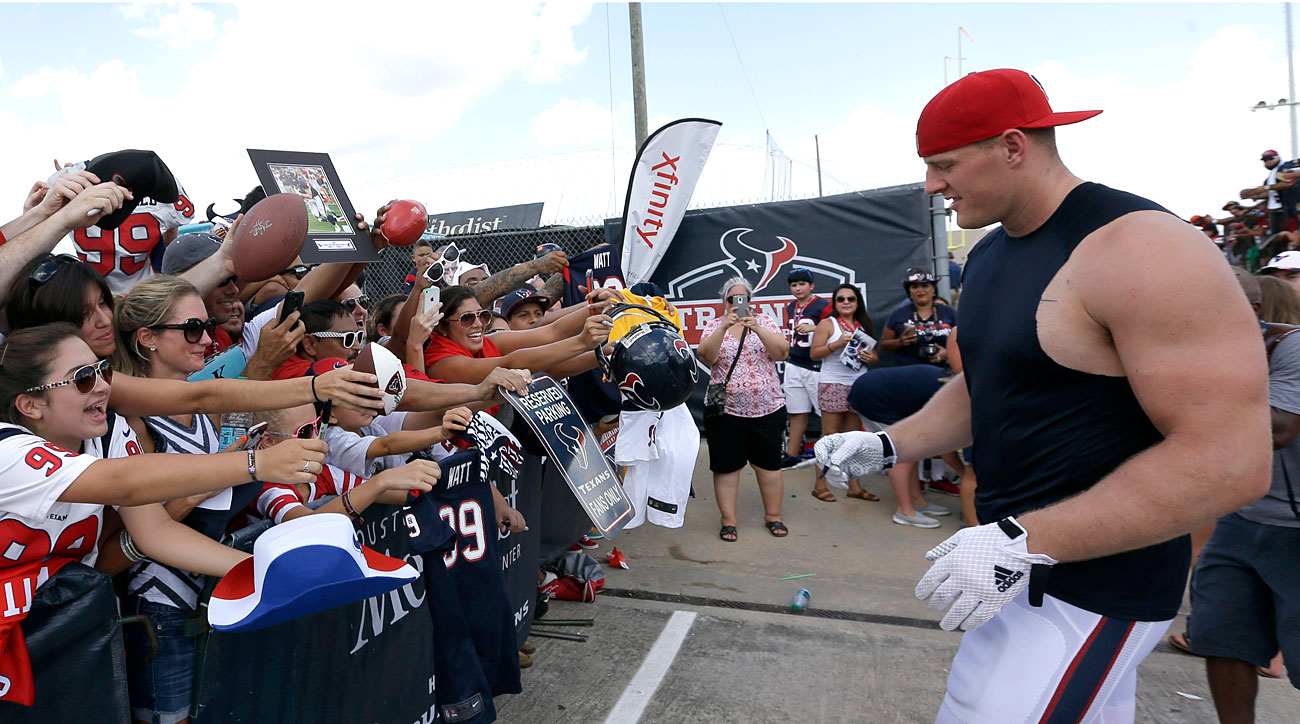 Training camp has begun across the league. This time around the Texans and Packers got together with some nice results from the fans. However, the scuffles happened, as seems to be the theme around these camps.

Football season is almost upon us folks and what kind of preseason would it be if there weren’t any scuffles? Here are some of the headlines of the 2019 training camp so far.

It has been a great time so far in Green Bay for a certain Mr. Watt. Well for the whole Texans organization it really has been a fun experience in Wisconsin. Many fans were seen wearing custom made Green Bay Packers jersey displaying Watt’s name and trademark number 99.

The whole organization has been so well received in the city that training camp has seen a number of people flock there to watch the teams practice. The love goes as far as a local biker group goes around their affection for number 99 around the city.

Of course, being from Wisconsin helps in Watt’s case as his homecoming has been something many have followed every time the Texans come into town. However, let’s hope he never ends up in a Packers jersey and retires a Texan as he should.

One of the few glaring holes left to fill in on the Texans roster is back up running back. Unfortunately, University of Texas product D’onta Foreman didn’t cut it. Head Coach Bill O’Brien was not pleased with the running back’s development and opted to put him on waivers instead.

With that in mind, now the Texans need a back up for Lamar Miller. One important thing to note, that O’Brien expects the backup RB to also play a pivotal role on special teams this season.

Whether Houston decides to look on the market or promote some of their practice squad guys, they need someone to fill in and fast. If the Texans expect to make some serious noise this year, they must have a healthy roster and that includes a healthy back up to a healthy Miller.

Clowney to report after hold out

Possibly the biggest news so far during training camp for the Texans is that Jadaveon Clowney is set to return to the fold. The holdout is set to end after the third preseason game. It is said that despite not being around the first few weeks, Clowney is looking healthy and ready for the season.

In fact, he’s in great shape and looks ready to bolster a solid defense that will lead the way for our offense. The plan is to not play him in the fourth preseason game and ensure he is ready to go for week one. Which is the smart way to handle his health. When he’s healthy, he’s a huge problem for the opposing team.

Clowney is coming off a nine sack season and one of his more productive and healthier seasons in his young career. The three times Pro-Bowler is essential to this defense. Almost as much as Watt is. When both guys are healthy, this defense gets a whole lot scarier for the opposing team’s quarterback.

The season is almost here

Overall, the season is here and ready to kick off. While it has had it’s moments, the Texans look ready to roll so far. This is their year to make a big statement. The time is now. No more excuses. No more flameouts.

Unfortunately for Bill O’Brien, good ain’t good enough. It is literally win or go home for the coach and he knows the pressure is on. However, if he can replicate that amazing win streak of last season, he’s in for a fun season. If things go south, it will be a rough ride for Bill.

This team is good. Truly good with the potential to be elite good. The pieces are there to make it happen. Hopefully, this season is different for Houston. The Texans are long overdue for a title. This city is desperate. With the Rockets and Astros making moves, the Texans need to catch up. The Astros have a title. The Rockets have been very competitive. Meanwhile, the Texans have yet to reach a conference championship game.

Will the Texans make a run this year? Let’s hope they do. It would be a sight to see all three teams win big. But let’s focus on the now. A strong start to the season is a good start. No injuries and no scuffles inside the locker room is another win. Most of all, win for Mr. McNair. The man who brought football back to Houston deserves a ring for his efforts.

For the latest on the Texans, Rockets, Astros, and anything Houston stay tuned to NGSC Sports where we never stop.

Until next time, Texans nation.