Stars have been shifted all over the league, while multiple role players have cashed in on large paydays.

As always, there are teams who hit home runs and others who strike out miserably. Below are the biggest winners and losers thus far.

Talk about cashing in on offseason expectations. The Clippers have debatably had the best offseason amongst any team in the NBA.

While Kawhi Leonard appeared on his way to the team, missing out on potential partners in Kevin Durant, Kyrie Irving and Jimmy Butler made things shaky.

The Lakers reportedly became a near lock to sign the Finals MVP while the Raptors still had a slight chance.

However at around 1:30 am Saturday morning, it was announced that Leonard had settled on the Clippers. A few minutes afterward, regular-season MVP finalist Paul George followed along in a trade.

Add in keeping Patrick Beverly and the Clippers now have the fiercest group of perimeter defenders in the league. Not only that, but they instantly become one of the title favorites.

Anthony Davis doesn’t factor into this decision, thus losing out on Kawhi Leonard has to overshadow any other thing the Lakers did this offseason.

Leonard strung the Lakers along for five days while all the top free agents found new homes. Names such as D’Angelo Russell, Jimmy Butler, and Kemba Walker all became unavailable as the Lakers’ patience was tested.

By the time it was announced that Leonard spurned the Lakers for their little brother across the hall, the free agency pickings became slim.

Again while this is solid depth, nothing compares to the impact of losing out on a player like Kawhi Leonard. To make matters worse, they’ll have to see him four times a year in their own building. 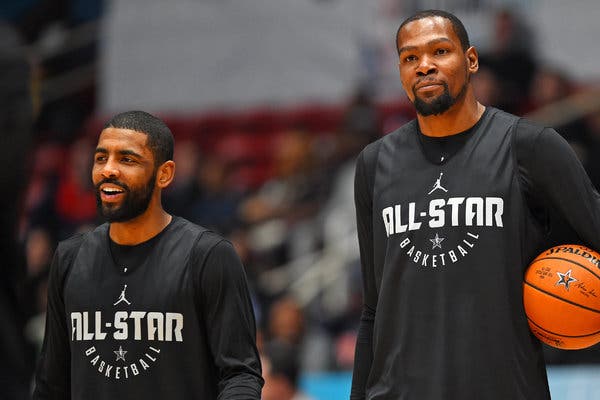 Following the little brother defeating the big brother theme, the Nets made a huge splash. They signed Kyrie Irving and Kevin Durant away from the Knicks, while also adding DeAndre Jordan.

After reaching the playoffs for the first time in four years, the Nets cashed in on the new culture taking place in Brooklyn.

Kyrie’s signing with Roc Nation all but confirmed it, while the rumblings of Durant wanting to play with Irving were in fact true.

Despite the fact that Durant will most likely miss the upcoming season due to an Achilles injury, this is still a big-time move. It should go without saying that whenever you can get a player like Durant, you do it.

With other core players such as Spencer Dinwiddie, Joe Harris, Jarrett Allen, and Caris LeVert still on board, the Nets have continued their ascension towards the top of the Eastern Conference.

What a nightmare offseason for the Knicks. Everything that could go wrong, did go wrong.

Not only did they miss out on every top free agent, but they overpaid for a group of mediocre players.

Julius Randle will be the lone highlight, as he’s deserving of the $21 million payday he got. The rest, however, served as disappointments.

They’ll have R.J. Barrett to look forward to, but James Dolan’s job has to be on the line at this point.

How could a team be considered a winner after losing a player like Kevin Durant?

You shock the league and sign a guy like D’Angelo Russell. Russell is no Durant obviously, but he is a better consolation prize than nothing.

The Warriors shed the contract of Andre Igoudala and kept Klay Thompson who should be out until the All-Star break at the latest.

The team also added a younger version of JaVale McGee in Willie Cauley-Stein.

In conclusion, the same team that made the NBA Finals without Durant lost Igoudala and added Cauley-Stein and Russell. If they can survive until Klay comes back, the Golden State dynasty might not be over just quite yet.

James Dolan is in a league of his own in terms of bad owners. Michael Jordan isn’t too far behind at this point.

Not only did he let Kemba Walker walk to Boston, but they signed Terry Rozier to an inexcusable three-year $56 million contract.

The Hornets will be immediately expected to finish with the worst record in the league. Not only are they lacking a star player, but there is now an embarrassingly low amount of optimism.

With a couple of bad contracts coming off the books in the 2020 offseason, look for the rebuild to truly begin then.

Until then the upcoming season will be long, slow and painful for this Charlotte team.

When you get a chance, take a look at the assortment of contracts on the Miami Heat. Pat Riley has been more than generous and we’ll leave it at that.

Then came Jimmy Butler who showed interest in following in the footsteps of his friend Jimmy Butler. With a little co-operation from the 76ers, the two teams completed a sign and trade.

Butler represents the best player to wear a Heat jersey since Lebron James left. Wade and Bosh went through injuries and nobody else had stepped up.

Miami is now one Russell Westbrook trade away from being among the top teams in the East.

The Rockets came into 2018-2019 thinking they were one Chris Paul injury away from being NBA champions the previous season. Let’s run it back and prove we can defeat the Warriors.

Age looks to be dragging down Chris Paul. That contract is starting to look horrendous.

Daryl Morey was unable to bring in Jimmy Butler through a sign and trade as well as moving the contract of Paul.

Houston may have already shown us their ceiling. Harden is great, and the Houston analytics system is second to none. They aren’t built for the playoffs with this roster though.

For the first time since Kevin Durant signed with the Warriors, the NBA is a toss-up. The league has become a league of duos.

The upcoming season has fans everywhere excited. There are at least 10-12 teams that can realistically have a case made for them to capture the Larry O’Brien trophy.

The age of the super team appears to be put to rest. Kawhi Leonard can be thanked for that by joining the Clippers instead of the Lakers.

Parity in the NBA makes for a more exciting season, and that’s exactly what 2019-2020 will present.

The Colorado Joker from Serbia: will Jokic triumph in the MVP race?