The next position that I would like to give my top 10 on is running backs. This position is probably one of the most fluctuating of them all because of the new talent that is initiated every season. Last season, Saquon Barkley burst onto the scene as a candidate to lead the next generation, while Adrian Peterson continues to spar with father time. No matter how you look at it, running backs come a dime a dozen but only a chosen few are elite. These are my top 10 running backs in the NFL heading into the new season, LET’S GO!

Todd Gurley had a dominant season in 2018 and even though he didn’t bring home a Lombardi trophy, it didn’t change the fact that he’s the best back in the NFL. Gurley had a combined 21 touchdowns (17 rushings, 4 receiving) and combined 1,831 yards from scrimmage, which he gained while having an unknown knee injury. He is going into his 5th season with the team and having scored 56 touchdowns he’s on pace to shatter some records. However, it will be crucial on how his diagnosis will be treated going forward if he’s to have a lengthy career.

Zeke Elliott is probably the most durable back in the NFL and may be in line to win the MVP award. Elliott totaled 2,001 yards from scrimmage last season and is expected to do the same in 2019. He is due for a new deal soon so look for him to have a career year.

This dude could be the next generation version of Barry Sanders with his agile moves and shifty footwork, Barkley has Hall of Fame written all over him. He led the NFL in yards from scrimmage with 2,028 as a rookie and he’ll only get better. If Eli is to succeed in possibly his last season as Giants QB, then Barkley will have to be his workhorse back and there’s no way around it.

Kamara is the heartbeat of the Saints offense and he’ll only get better with time. If you want to see what Marshall Faulk would look like in today’s NFL, then Kamara would be the closest thing to that happening. He’s gained as many yards receiving (1,535) as he has rushing (1,611), so him being a complete back is an understatement. He has 32 touchdowns in his first two seasons in the league only Todd Gurley has reached the endzone more (40).

McCaffrey may be one of the most underrated running backs in the NFL. He set the NFL record for receptions by a running back (107) and had a remarkable 1,965 yards from scrimmage to boot. If Cam misses any time in 2019, then McCaffrey will have to carry this team on his back, especially with the loss of Devin Funchess.

Gordon is the epitome of getting your money’s worth after missing FOUR games and still putting up Pro-Bowl type numbers. He was the Chargers workhorse back and one of their top receivers last season (2nd in receptions with 50), so if he stays healthy for a full season the Chargers could improve on a 12-4 season and that could be scary.

Leonard Fournette has to be one of the biggest question marks of the upcoming season, after missing half of 2018 due to injuries. He’s had problems on the field and off, so with the Jags seemingly wiping his slate clean he can get back to the dominant player of two years ago (1,040 rushing yards, 9 TD as a rookie). Jacksonville signed Nick Foles to a 4 year/$88 million dollar deal this off-season and the team was banking on Fournette being one of his biggest weapons.

Mixon is one of the best-kept secrets in the NFL because of where he plays. Many fans probably didn’t pay attention to him leading the AFC in rushing in 2018 (1,168), knowing that he played on a 6-10 Bengals team that was in disarray. Mixon was one of the only bright spots on an offense that lost their QB (benched the last couple of weeks) and had an offensive line that was ranked in the bottom half of league running the football. If the Bengals are to improve, Mixon and Green will have to be the catalyst of their resurgence.

David Johnson showed flashes of his incredible 2016 season (2,118 total yards, 20 total touchdowns) but it was impossible to get any momentum going on a team that ranked dead last in offense. He will have a new leader under center in Kyler Murray and New coach that has a wide-open playbook, which adds up to maybe put Johnson back at a pro bowl level in 2019.

I couldn’t make a top 10 without Le’Veon Bell and even though he missed 2018, he is still one of the top backs in the NFL. He has relocated to New York with the Jets and could be one of the reasons Sam Darnold turns the corner in his sophomore season. Bell will give the Jets an all pro at running back, something that hasn’t seen since Curtis Martin in the early 2000s. His route running skills will help a Jets receiving core that doesn’t have a legit #1 receiver. Overall I think he was the most valuable signing this off-season in the NFL.

Those are my top 10 running backs heading into the new season, but let’s have some fun and debate! Let me know your top 10 by dropping them in the comment box below this article! 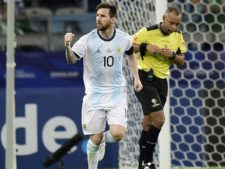