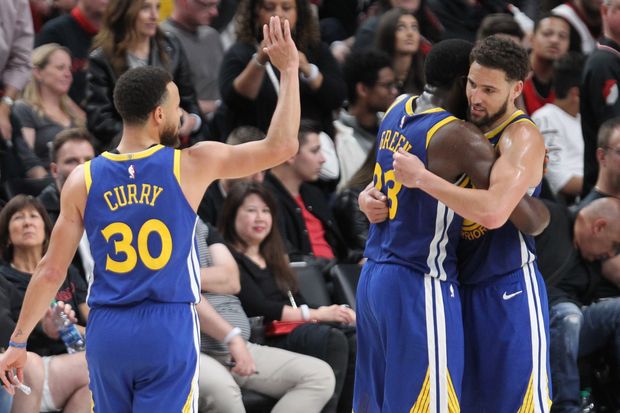 With the Warriors concluding a four-game sweep of the Portland Trail Blazers on Monday night at the Moda Center, history was made.

Golden State became the second team to have reached five straight finals since the Boston Celtics from 1957-1966. That only begins to describe this incredible feat accomplished by this dynasty.

This team wasn’t built through free agency or superstars suddenly wanting to play by the Bay. The team was built organically from the ground up.

Joe Lacob and Bob Meyers have run rough shot on the rest of the league thanks to a solid core as well as quality complimentary moves.

Sure, acquiring a spare Kevin Durant here and a spare Demarcus Cousins there will make life both fun and enjoyable. But let’s cut to the chase on how this team was truly built.

Steph Curry, Klay Thompson, and Draymond Green have grown together and become one of the most inconceivable trios in NBA history.

Draymond Green was a second-round pick despite coming from a solid program under Tom Izzo at Michigan State. Klay Thompson was quite the opposite being taken from the small school at Washington State with pick #11.

Even Steph Curry at pick #7 came from Davidson, a small school which was showcased during a magical march madness run.

Here we are though in the 2019 finals, with the Warriors awaiting their potential opponent. It’s safe to say they’ve exceeded any expectations ever imaginable.

The Warriors have helped transition the NBA, or have restored the beauty of team basketball. With the team motto “Strength in Numbers”, nothing more accurate could be used to describe how Golden State operates.

I know what you’re thinking, and it’s that the Warriors have an embarrassment of riches. Why are we acting surprised towards their success?

For starters, nobody is surprised per-say. However, respect and recognition are beyond in order.

When is the last time we saw dominance of an era like this by one team rather than a player? The early 2000s Lakers? The mid and late 90s Bulls? The Bill Russell Celtics? Even the Spurs of the 21st century spread their titles out.

Golden State’s accomplishments continue to pile up and become unheard of, especially in today’s modern era of the NBA.

Back to the embarrassment of riches.

Kevin Durant may very well be the best player in the world.

For years he has chased the coattails of one Lebron James, as he knocked off the three-time champion in back to back finals, while also taking home finals MVP honors both times.

But the cog that makes the machine that is the Warriors go round is Steph Curry.

He has literally and figuratively revolutionized the NBA as well as levels of basketball everywhere. The game has never seen a player needing to be guarded as soon as he crosses half court.

That’s no exaggeration either. Steph Curry can shoot from just inside the half court logo with regularity and incredible accuracy.

He demands 10 eyeballs from the opposing defense to be on him at all times. He spreads the floor like no other while consistently creating 4 on 3 mismatches out of the pick and roll.

The impact Curry has is truly remarkable. There is a reason that you can go to any pickup basketball game or local gym and find people shooting threes from 30-feet.

Is this good for the development of young players in the game? Maybe, maybe not.

However, it reflects the incredible impact Steph has on the game everywhere. From the professional level, all the way down to AAU, and even local parks.

Steph is also loved by his teammates and peers. He is the reason Kevin Durant has taken control as the leader of the Warriors.

Steph’s selfless attitude is reflected as the team’s identity from the bottom all the way to the top. He is why all the different personalities mix well rather than causing explosions.

Kerr, Curry, Thompson, and Green create an interesting dynamic. They all bring different personalities and skills to the table.

But the relationship works. They clash, they laugh, they go through ups and downs as we all do.

If this is the last season we see this group together, it sure has been one hell of a ride. The kind we just may never see again.