The Toronto Raptors and the Philadelphia 76ers are in a battle for the right to go to the Eastern Conference finals of the NBA playoffs. Here is a look back at games 3-5 in this hard-fought series.

Playing on their home court is just what was needed for the Sixers. They came out the gate on fire and the fire never went out. The 116-95 win gave Philadelphia a 2 to 1 lead in the playoff series. Joel Embiid scored and had fun doing it. He had 33 points, 10 rebounds, three assists, and five blocks in only 28 minutes of play. He was very dominant. He became the first player ever to have a least 30 points, 10 rebounds and five blocks in under 30 minutes in a playoff game. After the game, he said: “When I have fun, my game just changes,” Embiid said. “I’m always told if I don’t smile during the game it means I’m having a bad game or I’m not into it. I know to get my game going, I’ve got to have fun on the court.” Five other Sixers scored in double figures. Jimmy Butler scored 22 points and was one assist and one rebound short of a triple-double. As much as the Raptors tries to get Kawhi Leonard going, it just wasn’t enough to get past the Sixers on this night. He would finish the game with 33 points and Pascal Siakam would add 20.

The Toronto Raptors came into the game looking to even the series. Kawhi Leonard asserted himself from the beginning. He led his team to victory by scoring 39 points in the win. On this night, he got the help he needed and then hit a huge three-pointer with over a minute left. With the win, Toronto tied the series 2-2 and regained the home-court advantage. The Raptors also had Kyle Lowry, Danny Green, Serge Ibaka, and Marc Gasol all scoring in double figures. Jimmy Butler led the 76ers with 29 points, 11 rebounds, and four assists. Although he was under the weather, Joel Embiid played but he definitely wasn’t the same player he was in Game 3 scoring only 11 points. This was his lowest scoring game in the playoffs in his career. He played through an illness that almost had him miss the game. Head coach, Brett Brown said he got a text from Ebiid telling him he might be able to play the game. The final score was 101-96 Raptors. A big win for a team that came back for two straight losses. Jimmy Butler had 29 points and JJ Redick added19 for Philadelphia.

At the end of the first quarter, Toronto led Philadelphia by one point 27-26. After that quarter is when the wheels began falling off for the Sixers. Kawhi Leonard did not have to carry the team on his back. The Raptors used a balanced attack with six players in double figures to rout the Sixers 125-89. Although Leonard has been the most dominant Raptor in the series, Game 5 gave other Raptors the opportunity to shine. Pascal Siakam scored 25 points to lead Toronto. Kyle Lowry added 19. Danny Green and Mark Gasol were raining down three-pointers in the game. Danny went 5 for 7 and finished with 17 points while Mark contributed 11 points going 3 for 5 from beyond the arc. Jimmy Butler led the 76ers with 22 points. Although he played, Joel Embiid was definitely under the weather. He finished with only 13 points. The 76ers will definitely have to go back to Game 3’s playbook when they meet Toronto for Game 6 on Thursday night in Philadelphia. 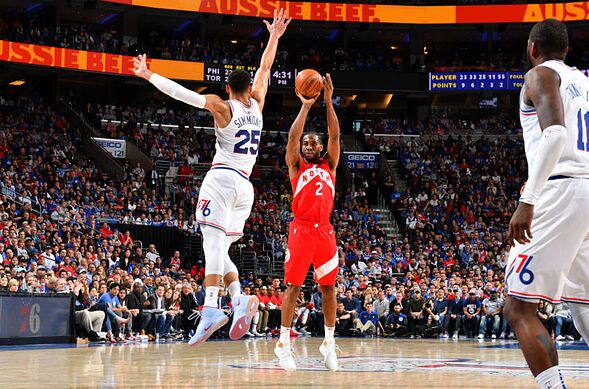