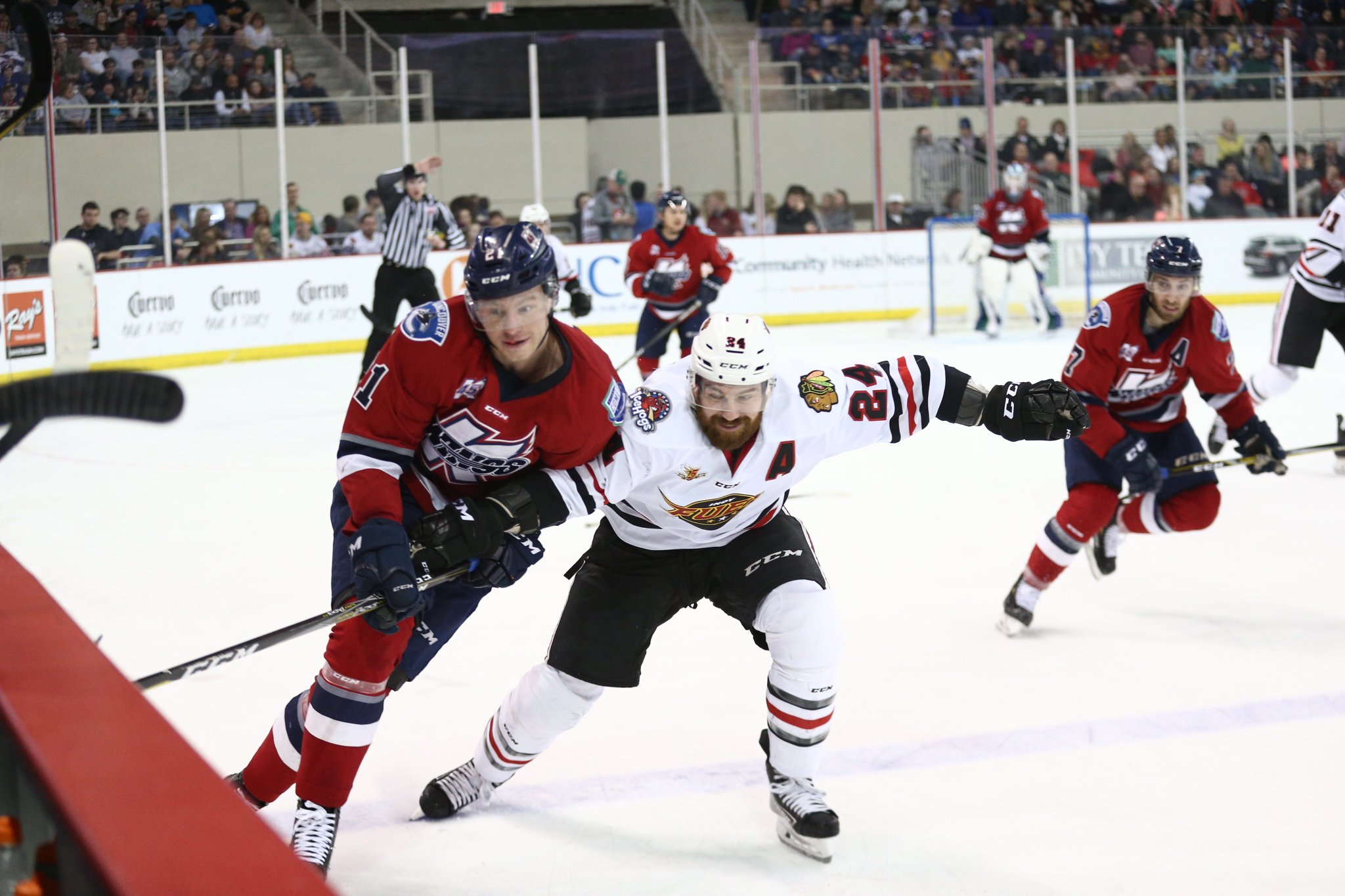 The Indy Fuel came home for their lone home contest of the weekend. This was a crucial matchup against the Kalamazoo Wings. The Fuel played a well-rounded, complete game playing well in all aspects. Indy got the 5-1 victory and moved within four points of a playoff spot.

The Fuel started the game strong and never let up, putting eight shots on goal in the first three minutes of the contest. Just under four minutes into the game, Olivier Labelle took a beautiful feed from Mathew Thompson and put it behind Wings netminder Ivan Kulbakov for his 13th goal of the season. Through the first five minutes, Indy outshot Kalamazoo 13-1. The Wings were clearly playing frustrated and it boiled over when a major scrum broke out in front of the penalty boxes. After all had been resolved and penalties had been served, Kalamazoo’s Tanner Sorensen went to the box for slashing. Just 19 seconds into the resulting power play, Matt Rupert doubled the Fuel lead with his 20th of the season.

It was clear that Indy was playing with a purpose. Their passing was crisp and their defense was extremely sound. Just over midway through the period, Josh Shalla put one past Kulbakov for his 24th goal of the season. The tally also marked Shalla’s 300th career ECHL point. The goal gave Indy a 3-0 lead, which they took into the locker room.

FUN FUEL FACT: The three goal scorers in the first period now (at the end of the period) have their jersey number in goals for the season:

#13 Olivier Labelle’s 13th of the season

While still physical, the second period was much quieter in terms of offensive production. The Fuel’s penalty killing units continued their stellar play as they killed off three penalties during the frame. The Fuel and Wings threw their bodies around and big hit resulted. The score would remain 3-0 after two periods.

The action in the third period began almost immediately. Fuel captain Zach Miskovic got caught for high-sticking just 15 seconds into the period. Only seven seconds into the power play, Kalamazoo’s Luke Sandler beat Matt Tomkins with his fifth goal of the season. The score was now 3-1 Fuel. The Wings continued to mount pressure on Tomkins and the Fuel, but Indy’s goalie stood tall and made some stellar saves to protect his team’s lead. With a little over seven minutes left, Ryan Rupert found the back of the net for his 20th goal of the season to extend the Fuel lead back to three. Just three and a half minutes later, Shalla ripped one past the glove of Kulbakov for his second of the game and 25th of the season. The score was now 5-1 and it would end that way.

The Fuel hit the road this afternoon, March 3, to take on the Toledo Walleye, who currently sit in second place in the central division. The Walleye clobbered the Fort Wayne Komets last night, 11-0, so the Fuel will look to slow Toledo’s offense and grab another crucial two points. The puck drops at 5:15 pm ET.