At the start of the 2018 NCAA basketball season, all eyes were on Duke. They recruited the top three players in the nation in Zion Williamson, RJ Barrett, and Cameron Reddish. Little did they know, they would have a challenger in the SEC taking the reigns as the number one team in the country. No, not Kentucky but the Tennessee Volunteers

Coming into the season, it was hard to imagine Tennessee being placed with your traditional heavy hitters like Duke, Kentucky, Virginia, and Kansas. The Volunteers, led by head coach Rick Barnes have made a statement so far this season that they are a force to be reckoned with. They may not be your typical powerhouse program, but they are ready to prove it to anyone in the country.

Tennessee began the season as the sixth team in the country. It is the highest ever preseason ranking the program’s history.  It was no question Tennessee deserved the recognition as a sixth seed from the previous year, unfortunately, falling to March Madness sweetheart Loyola-Chicago in the round of 32.

Tennessee comes into the first week of February as the number one team in the country for the second straight week. Tennessee’s only loss comes to the number 11 team in the country in the Kansas Jayhawks who were just defeated by the unranked Texas Longhorns last night. If it wasn’t for Grant Williams fouling out late in the game at Kansas, Tennessee would be undefeated.

It takes a lot of effort and hard work to put together a number one team and Rick Barnes is proving that. Tennessee’s roster consists of zero top 100 recruits. When you think of Tennessee, you normally think of football and women’s basketball. Barnes is trying to be the change in that culture and we can all agree, he’s definitely putting UT on the map for many. They currently rank as the 29th recruiting class according to 247sports.com

But what’s made Tennessee so good this year? It’s the trio that was highly unrecognized. Junior guard Jordan Bone averages 13.1 points per game while also ranking in the top 20 in assists with 129. Senior guard Admiral Schofield, just recently coming off a terrible performance against Vanderbilt shined last night against South Carolina. Schofield put up 24 points, nine rebounds, and four assists. Schofield averages 16.6 points per game.

The man that has made his mark on this program is none other than junior forward Grant Williams. Williams recently comes off his best game performance against Vanderbilt in an overtime win. Williams was 23 of 23 from the free throw line, the most free throws made in a row in Division I in over 60 years. His career high 43 points are the most by a Volunteer since all-time leading scorer Allan Houston 29 years ago. Williams had 23 points and nine rebounds last night against the Gamecocks. 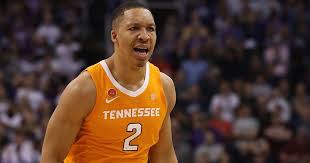 It’s no secret that Tennessee basketball is here at least for 2019. It looks like all three players will be entering the NBA draft and that worries some fans. The bright side is, look what Barnes has been able to do with scouting and hard work. He has this program focused and hungry to bring home an SEC crown and a National Championship. Still, there is plenty of work and season left but Tennessee looks to make their mark in the NCAA tournament this year.

Topics: Los Angeles Dodgers Place Starting Pitcher Walker Buehler on Injured List with BlisterChicago White Sox Place Starting Pitcher Dallas Keuchel on Injured List with Back SpasmsOakland Athletics Third Baseman Matt Chapman to Undergo Season-Ending Hip SurgeryWe will look at the playoff racesWhat a gem by Braves youngster Ian Anderson in a one-hit 7 inning performance. Cubs Alec Mills throws the second no-hitter of the yearWhat a difference a week makes. The Yankees are back on trackWe talk about MLB idea of a bubble for the playoffs

We're Back Home Baby on NGSC Sports! Saturday Night.s Live from 9-10 PM2 Dudes Talking Smack and Bringing You All the Feels For SportsCall In Number will be 712-770-4160 PIN 576041Topics – NFL is Back NBA Playoffs NHL Playoffs My Man Sean Is Back with his week 1 NFL Picks Open Forum with Live Feed and CallersPulll Up a Chair/Computer/Phone Screen and Hang out with us on FB as HPS is presented by NGSC Sports Where We Never StopI'm going live using StreamYard! Before leaving a comment, please grant StreamYard permission to see your name at streamyard.com/facebook