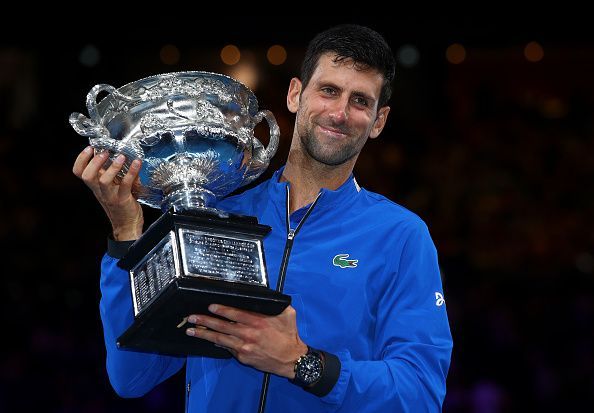 Novak Djokovic is the first tennis player in the history to win the Australian Open seven times, passing Roy Emerson and Roger Federer. The Serbian took over his long-term rival Rafael Nadal in straight sets.

It was the second time that Novak Djokovic and Rafael Nadal met in the Rod Laver Arena to fight for the Australian Open title after their epic match in 2012. Back in the day, as well as this time, the winner was the same: Djokovic. The Serbian swept Rafael Nadal 6-3 6-2 6-3 in two hours and four minutes to claim the Norman Brooks Challenge Cup for the seventh time. He explains, “At this level, under these circumstances, it was truly a perfect match.” With his 15th Grand Slam win, the world’s number one player is climbing up the ladder of Grand Slam wins passing his childhood idol Pete Sampras.

Everyone expected another unforgettable match considering that the two best players in the world were in top form on their way to the final. While Nadal battled down the striving next-generation talent Stefanos Tsitsipas in three sets, Djokovic just needed one hour and 23 minutes to eliminate Frenchman Lucas Pouille. However, Djokovic did not leave Nadal, with whom he had “… the most significant rivalry,” any chance.

On Sunday morning at 3.30 AM (Eastern Time), the Serbian started aggressively by breaking Nadal’s opening service game. “Things started so quick, he was pushing me to every ball. He played so long; his returns were fantastic … he was moving unbelievably well,” the Spaniard, for whom it was the first tournament since the US Open last September, admitted. He now lost four out of five Australian Open finals. In the press conference after the match, Djokovic notes, “The energy and power he (Nadal) puts in his shots are really intimidating from the first point in a match. I was expecting that, so knowing that made me even more ready to start off well. Having a set under my belt just made me kind of relax a little bit more.” In the first set, Nadal could only win one single point when Djokovic was serving.

At the beginning of the second set, the match seemed to be more equal, but Nadal could not stop Djokovic from breaking his third and fourth service game. In total, Nadal made 25 unforced errors. On the other hand, a flawless Djokovic just recorded nine errors in total. In the final set, Djokovic just continued to press Nadal into defense breaking him to 2-1 and 6-3. Nadal’s only break opportunity that he could not use occurred when Djokovic netted a forehand at 3-2. Djokovic stated that this match “… ranks at the top” among his best finals.

Both players had to deal with major injuries in the last year. About one year ago, Djokovic underwent elbow surgery from which it took him a while to recover. In his first two Grand Slams last year, Djokovic experienced early losses until he won Wimbledon in June and the US Open in September where Nadal had to retire in the semi-final versus Juan Martin Del Potro. The 17-time Grand Slam winner suffered knee and abdominal problems, as well as ankle surgery.

Looking into the future, Djokovic reveals, “There is a lot of tournaments to play before Roland Garros. I have to work on my clay court game a little bit more. The ultimate challenge there is to win against Nadal.” The Spaniard needs more time to work on his defensive game. He believes, ”I need more weeks like this one. I have been playing against a player that was at the highest level possible. I can be ready in a couple of months if I am able to keep practicing and competing at that level.” Roland Garros, the next Grand Slam tournament on the ATP-calendar, starts at the end of May.