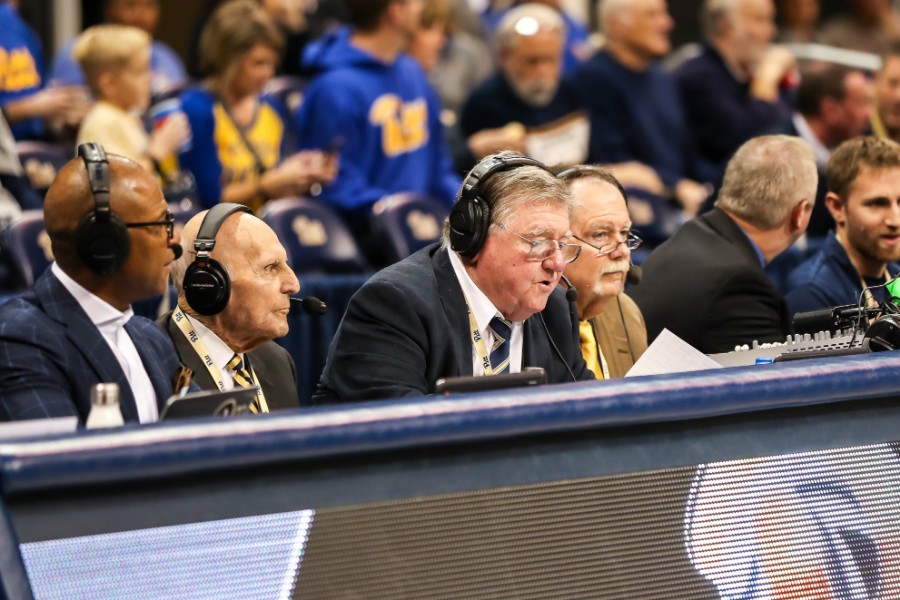 Winston-Salem, N.C. (January 22, 2019) – Bill Hillgrove, the longtime radio play-by-play announcer for University of Pittsburgh football and basketball, has been voted by the National Sports Media Association as the winner of the second Woody Durham Voice of College Sports Award. Sponsored by Learfield IMG College and the University of North Carolina athletics department, the award will be presented during the 60th NSMA awards banquet in Winston-Salem, N.C., on June 24, 2019.

Hillgrove is a Pittsburgh native and Duquesne University graduate, who began his Pitt broadcast duties in 1969, doing only Panther road games. The next season, he became the full-time color commentator, alongside play-by-play announcer Ed Conway. When Conway died in 1974, Hillgrove took over as the play-by-play announcer, a job he has held ever since.

In 1978, Hillgrove added television sports anchor to his duties, serving as sports director for WTAE-TV.

In 2007, the National Football Foundation honored Hillgrove with its Chris Schenkel Award, in recognition of his work as Pitt’s football broadcaster. He just finished his 45th season broadcasting Panther football, and is in the middle of his 51st season broadcasting Pitt basketball.

Bill and his wife of 54 years, Rosette, live in the Pittsburgh area. They are the parents of one son (Bill) and one daughter (Leah), and proud grandparents of two grandchildren.

About the Woody Durham Voice of College Sports Award

Created in 2018, the Woody Durham Voice of College Sports Award recognizes professional college broadcasters who fit the following criteria: preparation; association with his/her school; tenure at their school; efforts in the community; mentorship of young broadcasters; character. The award is sponsored by Learfield IMG College and the University of North Carolina athletics department.

About the National Sports Media Association

The National Sports Media Association, Inc.is a 501(c)(3) non-profit organization, which seeks to develop educational opportunities for those who are interested in pursuing a career in sports media, through networking, interning, mentoring and scholarship programs.

The NSMA also honors, preserves and celebrates the diverse legacy of sports media in the United States.

For more information on NSMA, go to nationalsportsmedia.org