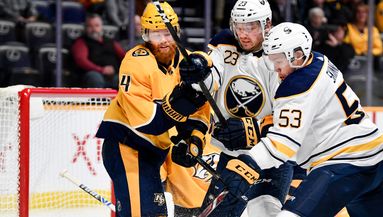 It’s not every day a Tennessee fan can claim their team is number one but the Titans and Grizzlies are teams you can never count on. However, the Nashville Predators are a team that has always attempted to improve and they finally have risen to the top. As many people say today now: Nashville is a hockey city.

Hey @Titans pack your bags and get out of Tennessee. We are sick of the mediocre trash you put on the field every week. Nashville is a Hockey city now. Every week is embarrassing watching this team play pic.twitter.com/ficUqnKgBg

Nashville is a hockey city. Change my mind

Now not everyone believes it, but what reasons do you have to justify that Nashville isn’t or won’t be a hockey city.

The Predators have been able to defeat all odds making it to the Stanley Cup finals two years ago and coming short of the Western Conference championship last year.

It’s not only your everyday staters that are making an impact for the Preds. Forwards Viktor Ardvisson and Filip Forsberg are both out up to six weeks which can make or break a team especially when they are your top goal scores on the team.

Nashville recently comes off a win against former coach Phil Housley and the Buffalo Sabres who are a surprising team thus far this season. The result ended at 2-1 in a tightly contested match. Before Monday’s matchup, both teams had 37 points tied for third best in the NHL.

Without the play of goalie Pekka Rinne, the Predators would not be where they are today. The reigning Vezina Trophy winner leads the league in GAA (Goals against average) at 1.81 and save percentage with .935. Rinne is also tied for third in wins and shutouts. Needless to say, Rinne is on fire and looks like an early favorite to retain his Vezina trophy.

Nashville has won their past two games but despite the success, the injury bug has bit in Nashville. As mentioned earlier, Arvidsson was the first to go. P.K Subban was fashionably bitten next followed by Kyle Turris and Forsberg. As of this date, Subban and Turris are unknown when to return. Arvidsson and Forsberg have a schedule of up to a six-week return.

The Preds currently are in third and are on pace to once again becoming central division champions while also receiving another Presidents trophy. If this team keeps playing the way they are now and add those four key pieces back to their lines, this will once again be a team that people will fear to play down the stretch and come the post-season.