Expectations were set and lost by the Tennessee Titans. After defeating the New England Patriots in a strong performance last week 34-10, the Titans had all the confidence in the world going into Indianapolis to take on the Colts.

Well, it didn’t happen how the previous week did or even what a lot of Titans fans thought was going to happen. The Titans were not only defeated but embarrassed by the Colts losing 38-10. The Colts offensive line helped protect Andrew Luck for the fifth straight game not allowing a sack. Luck wasn’t even touched except for one snap and that was a slight push.

The Titans defense allowed Luck to go 23 of 29 for 297 yards with 155 yards going to T.Y. Hilton. One being a 68-yard touchdown when Hilton was able to slip past Titans corner Adoree Jackson. Luck finished the game with three touchdowns. The victory helped improved Luck’s record to 10-0 all-time against the Titans. The defense was able to hold the run game less than the season average but allowed two touchdowns in the meantime.

The Marcus Mariota injury just put salt on the already badly bruised wound. Titans first five possessions: Punt, punt, interception, punt, and punt. Mariota finished the game 10 of 13 for 85 yards and an interception. Blaine Gabbert was able to come up with a touchdown pass in garbage time to add to the stat line with an interception. Gabbert finished 11 of 16 for 116 yards.

The running attack from both players was not too much of a shock. Derrick Henry had his longest run of the season for 16 yards and finished with nine carries for 46 yards. Dion Lewis only had 24 yards on 10 carries. The Titans finished with just 87 yards for the game. 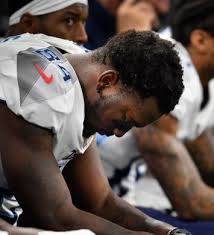 Defensive coordinator Dean Pees was hospitalized in the first quarter for reasons that are still unknown. His condition could dictate the kind of defense that’ll show up for Monday night’s AFC battle against the Houston Texans. Thanks to the loss last week, the Titans are now 5-5 tied with the Colts for second place in the AFC South. The Texans lead with a 7-3 record.

Monday night’s game against the Texans will be the make or break game for the Titans. The Titans stand 3-5 in the conference and with a loss, that will knock them out of the AFC South, especially the Wild Card. However, you can never tell which Titans team will show up. Will the team that faced the Eagles, Patriots, and Cowboys show up? Will the team that lost to the Dolphins, Colts, and Bills show up? It’s so hard to tell with this team. If Dean Pees is not able to make the game, this will once again be another horrible display of a top 10 defense. Another note to mention would be the health of Mariota. If he’s unable to play, I don’t believe the Titans stand a chance.