Yesterday was the first of another two-game weekend homestand for the Indy Fuel. This weekend, the Fuel will match up against the Cincinnati Cyclones and the Toledo Walleye. The promotion of yesterday’s game was “Pink in the Rink.” This is the Fuel’s fourth annual benefit game for local breast cancer organizations. The game kicked off with a breast cancer survivor of five years dropping the ceremonial puck. Throughout the game, the running LED boards in the Coliseum displayed the names of multiple breast cancer survivors.

Just 3:00 into the first period, the Cyclones opened the scoring thanks to Spencer Dorowicz. Just like their games last weekend, the Fuel was not far behind with scoring. Their first goal came 3:19 into the game thanks to Matt Rupert. That was his first goal of the ECHL season, but his 52nd career goal. Soon after, Zach Miskovic was sent to the penalty box for slashing. The first period closed out with Shaw Boomhower getting sent to the box for unsportsmanlike conduct. That was his second penalty of the season. Cincinnati led the Fuel in shots on goal 17-7. The period ends with a 1-1 score.

The Indy Fuel broke open the second period with a goal by Josh Shalla, his first of the season. It came 3:23 into the game. Less than five minutes later, Logan Nelson sat in the penalty box due to too many men on the ice penalty. Just over halfway through the period, Robert Powers scored his first career goal. With less than five minutes left in the second period, a fight broke out between Anthony Florentino and Mathew Thompson. They both returned to the locker room to sit out the rest of the period. 18:15 into the period, Shalla puts the nail in the coffin for the Fuel, securing their victory. Cyclones were leading the shots on goal, 31-19.  Fuel end the period over the Cyclones, 4-1.

The third period was full of penalties. The Fuel started the period with a penalty when Josh McArdle was sent to the box for tripping. Cincy had back to back penalties, one for slashing and roughing. Then a fight broke out between Connor Moynihan and Arvin Atwal. Moynihan was charged with a cross-checking penalty in addition to his five for fighting. Atwal had slashing and fighting penalties against him. The Fuel then faced back to back penalties with a tripping call, then delay of game when Robert Powers flipped the puck over the glass when trying it send it down the ice. In the end, the Cyclones led the Fuel 40-25in shots on goal. Indy won the game 4-1. 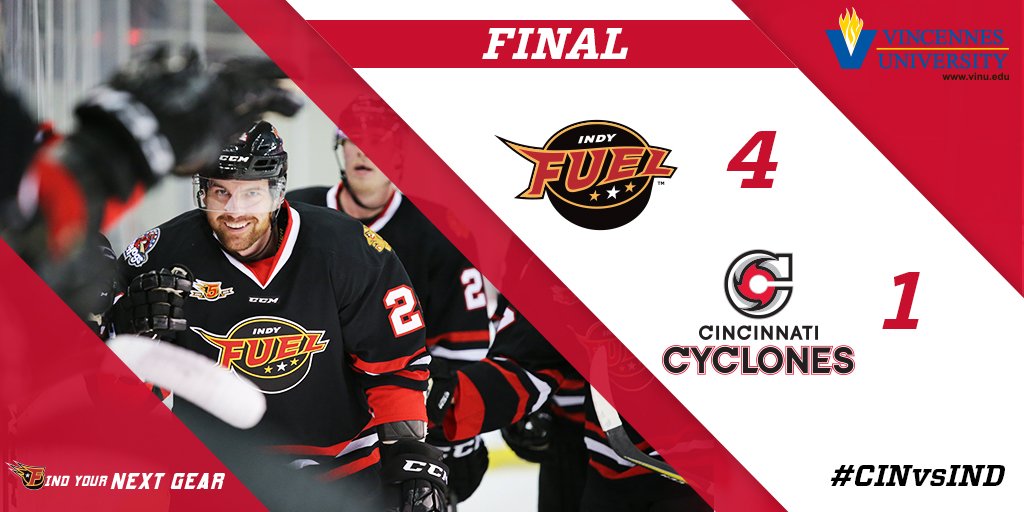 The Fuel will play again on Saturday, 19 October at 7:35 PM. They will face off against the Toledo Walleye in the Indiana Farmers Coliseum. It is military appreciation night and there will be a post-game auction jersey.

Spinners gearing up for season’s end