0
Read Time:3 Minute, 4 Second
This Saturday, Boston College has a chance to inch closer towards a return to the national rankings for the first time since entering the 2008 bowl season at #24.
After a record-setting, season-opening throttling of the UMass Minutemen 55-21, BC sits at #28 in the AP Poll, or #3 in the “others receiving votes” category. Week two will be a difficult week for BC to move up, as most of the 27 teams ahead of BC are expected to dominate their opponents this weekend. This makes it extra important that the Eagles keep pace with the other top dogs by coming out hot and not giving Holy Cross even a sliver of hope.

One of the oldest rivalries in college football resumes Saturday.@BCDanRubin has more in his latest feature on https://t.co/HgdnqbkOnfhttps://t.co/QfvrO5WYNe#WeAreBC pic.twitter.com/DGlQJKIR5o

Boston College-Holy Cross probably doesn’t generate a ton of buzz for current Eagles fans, but it used to be quite the rivalry. The two haven’t squared off since a 56-26 BC victory in Worcester in 1986, but, believe it or not, Holy Cross used to be the classic Thanksgiving-weekend rival for BC.
There were many classic games between the two in the 82 games they played against each other from 1896-1986. The winner of the second-ever matchup is still disputed, as BC scored the winning touchdown while a fight was going on on the field. The referee originally nullified the TD, but later reversed his decision.
During 1940, when BC, Stanford, Tennessee, and Minnesota finished in a four-way tie for #1 team in the nation, BC eeked out a win over HC at Fenway in the final regular season game of the season in a 7-0 defensive battle.
Two years later, Holy Cross returned the favor with a 55-12 thumping of a Boston College team that entered the game, the final one of the season, ranked #1 in the nation. This isn’t the end of the 1942 game’s story, however; BC was so sure that it’d win that the team already booked a victory party at the Coconut Grove nightclub in Boston. The Eagles canceled after the upset. That night, the club burnt down, killing nearly 500 people. 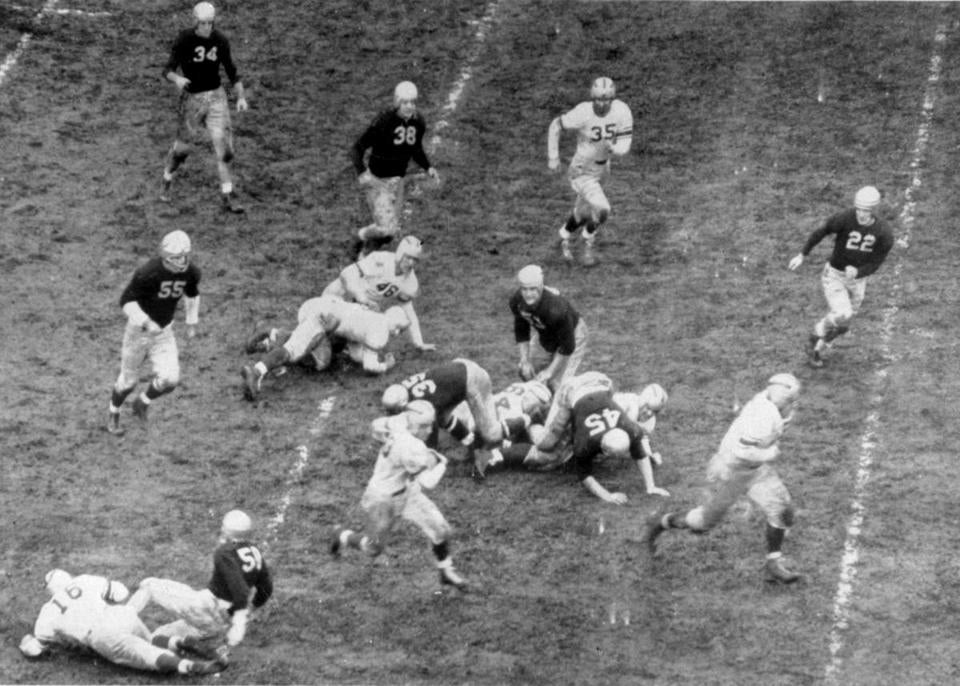 Enough about the past, it’s time to talk 2018. Holy Cross came into the season ranked as a middle-of-the-road Patriots League team and fell to Colgate 24-17 in week 1. The Crusaders had trouble with ball security against Colgate; three of their first five drives ended in a turnover, which resulted in a 24-0 Colgate lead. Holy Cross admirably battled back but ultimately had already dug too big of a hole and fell 24-17.
Holy Cross is led by first-year coach Bob Chesney, who entered the season with a combined 67-26 record at Salve Regina and Assumption. He faces a tall task in turning around the still-rebuilding Holy Cross football program.
The Crusaders will struggle to replace one of the best quarterbacks in school history in Peter Pujals. Geoff Wade appeared to be the starter, but Emmett Clifford took all the snaps in the Colgate game and is listed as QB1 on the depth chart.
On the other side of the ball, Holy Cross’ defense help Colgate to just 91 yards on the ground. But don’t expect history to repeat itself. After all, Colgate didn’t have an AJ Dillon.
This game should be over even quicker than the UMass game. Expect Dillon and Brown to play a half at most. The defense will force multiple turnovers and BC will breeze to a win before ACC action kicks off Thursday night in Winston-Salem.
Prediction: BC 62 – HC 10
Facebook
Twitter
Pinterest
LinkedIn